Prepare to read Vincent Bevins’s The Jakarta Method in one sitting because it's impossible to put down. The book is a summation of the US government assisting the Indonesian military in killing approximately one million civilians from October 1965 through March 1966.

Over the years as an animal activist I’ve shown many films of graphic animal cruelty, both in class rooms and in the streets. Except for the granddaddy of them all, 1981’s The Animals Film, there is very little art about them. Mostly, they’re just blood and guts.

And I’m a big believer in showing blood and guts because if they are left out completely -- as in The End of Meat (2017) or Eating Animals (2018) -- the films don’t engage the emotions and are forgotten about the next day. Without the suffering and killing there’s no sense of urgency and we are left wondering exactly what the stakes/steaks are. Absent this truth, these films feel hollow no matter how well-intentioned and researched.

Not My Brother's Reefer

Sometimes when I’m kneeling on the outermost rocks in my favorite cove in Big Sur, the spray hitting me in the face and the endlessly popping champagne stallions rearing up on both sides of the cliffs, I feel one with this powerful dynamic being called Earth. I understand that, though I will disappear, it has been a great privilege to have been here. The Earth will go on, regenerate, prevail. If necessary, it will shake off the “disease” of humanity, as my favorite movie hero, Agent Smith of The Matrix, called us. I’m feeling one with the eternalness of the Earth and I’m positive that I know what’s goin’ on, what’s goin’ on — it’s washing over every cell in my body, it is my body. I’m in tune.

As Namaste As I Wanna Be 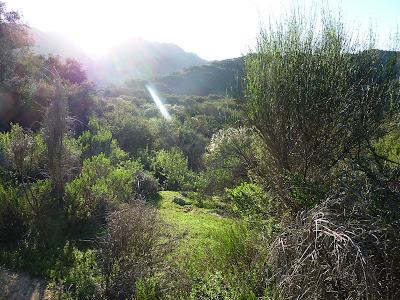 I moved to LA last year but I’m a little out of place here. I’m not used to being around so many peaceable people and they’re not used to fire and brimstone animal liberation. Animal activists in Ohio (where I’m from) have some things in common with our opponents: we often have farms, horses, pick up trucks and guns and we believe hunters, trappers, animal farmers and vivisectors can stop sinning or they can get the fuck off the planet. We don’t believe in giving them their “space” or any other thing they don’t deserve.

LA is a different matter. LA is a very Buddhist kind of city. Buddha was known for saying incredible things like: “May all that have life be delivered from suffering.” Or: “Now may everything, young or old, weak or strong, near or far, known or unknown, living or departed, or as yet unborn, may everything be full of bliss” — and then you have to keep in mind that he most likely died of eating tainted pork. He was probably the Obuddha of his day.

A Cow and Her Boy

Out of Her Hair